Bill Hanna has been playing jazz in its purist form in venues around Charlotte since 1960. Hanna taught music in Charlotte-Mecklenburg Schools for 30 years before he began teaching at Central Piedmont Community College in 1990. Despite having previously toured the country with two of the biggest names in jazz at the time (the Woody Herman Band and The Stan Kenton Band), he says he never viewed his role as an educator with any shortage of importance. His love for music has lead him to have a huge influence on a lot of Charlotte’s musicians, earning him the nickname “The Godfather of Jazz.”

Hanna that teaching has actually helped him to improve on his game. “If you play jazz, you will eventually know that you are never going to master it. You keep learning it until you die. When you die, you stop learning it,” he says. “The more you know the more there is to know.”

Hanna is “a Charlotte institution,” says Tim Freer, onetime general manager of Cajun Queen where Hanna has played over 20 years, often with his former students sharing the stage.

Adrian Crutchfield, who has performed on stage with Prince, Anthony Hamilton and Fantasia Barrino, says Hanna was instrumental in his development as a jazz player and has been integral in the local jazz scenes growth over the years. “If we didn’t have Bill, we wouldn’t have a jazz community here in Charlotte,” Crutchfield says. “I mean we people that are playing, but not a community. Everybody would just be playing separately. They’d be doing stuff at their house, or maybe doing little sessions here and there, but Bill is like the face of the jazz community in Charlotte, and without him, the community here wouldn’t be as advanced as it is.”

• Tickets can be redeemed using a smartphone, no printing is required.

• All shows all ages unless otherwise posted, but please consider this is an adult setting.

• A full bar and light food menu are available throughout the show.

• At Middle C Jazz, we believe in taking care of each other and of ourselves. Please approach your concert experience with consideration for the enjoyment and safety of others, and please travel to and from your show responsibly. 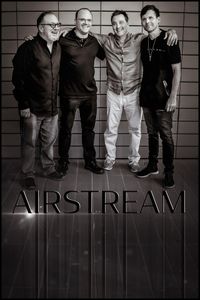 An Evening with Airstream

Join Airstream for their premiere-show at Midwood Guitar Studio on Thursday, August 1st.Recently featured at the Tosco Music Party and the Charlotte Jazz Festival, this all-original, jazz-fusion group is based in Charlotte, NC and features: Andre Ferrari on guitar, Mark Stallings on keys, Dave Vergato on bass and Al Sergel on drums.Tickets are $15BYOB 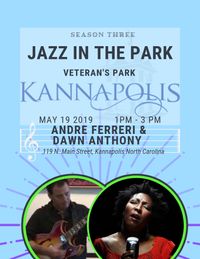 Jazz In The Park- with Dawn Anthony & Andre Ferreri